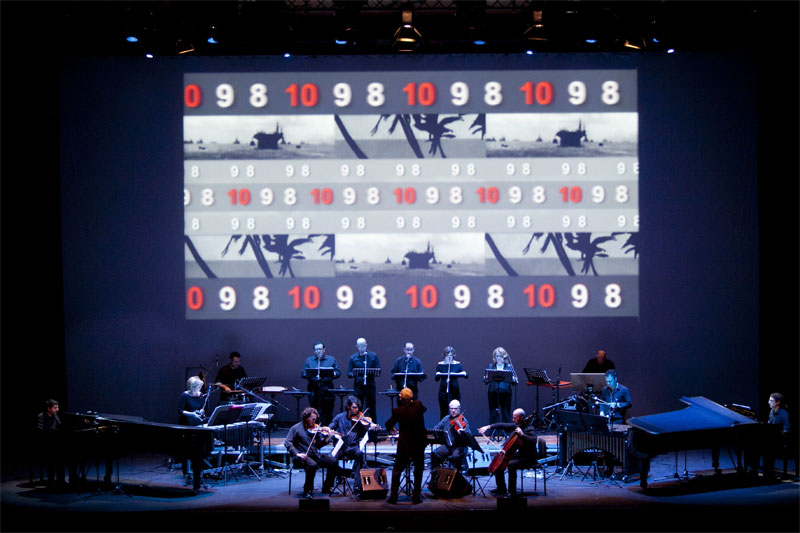 I suddenly noticed that Konzerthaus Berlin hosted a work I never heard by a composer I admire: Steve Reich’s “video opera” Three Tales – the video part created by his wife Beryl Korot.

The work interprets the development and failures of human ingenuity in three movements: One about the Hindenburg disaster, one about the atomic bomb experiments in the Bikini Islands, and one loosely structured around cloning, robotics and evolution. All of them combining documentary audio footage with orchestra, choir, soloists and video.

It was interesting to hear how far Reich’s music has evolved. Where minimalist repetition used to be the focus of his work, it is now merely an element in a richer musical palette. And while there are still passages of pleasing diatonic beauty, he now also (not least in the Hindenburg movement) makes uses of jarring dissonances.

I found the Bikini movement the most musically convincing: Bringing together a great number of layers – documentary footage and quotes from the book of Genesis – it was amazingly structured around a prolonged countdown, evoking both the terror and the fascination of humanity letting loose forces they still didn’t quite understand.

The last movement was fascinating as well, but also confusing: The video showing scientists (and a Rabbi) making various statements actually distracted from the music (on a first listening). And I was slightly disturbed by the use the digital editing of some scientists (like Richard Dawkins), turning them into stuttering robotic maniacs. It did turn speech into a rhythmic element – but also seemed more like a cheap shot at the couple’s pet hates.

Oh – and this was my first visit to Berlin’s lovely Konzerthaus on Gendarmenmarkt – a building so classical, it even makes the audience look like they belong in a bygone golden age.